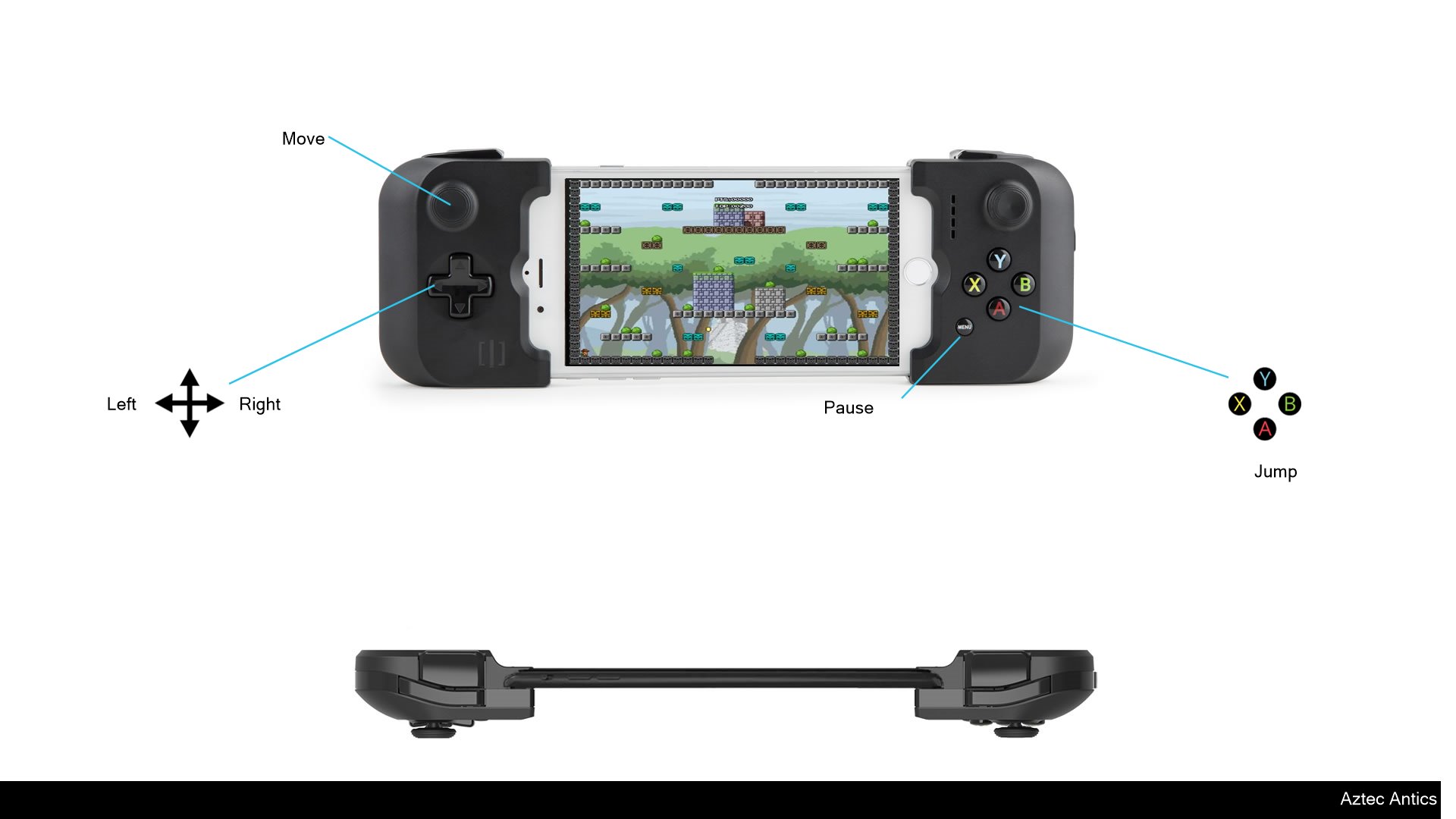 Aztec Antics is a fast-paced, manic, collect-the-gold, single-screen platform game for one-to-six players, which involves jumping on people's (or monsters') heads. After all, how else can you stop them from grabbing the gold? (We tried asking nicely. They said no.)

There are five single-player and ten multiplayer levels, a choice of virtual controls or hardware controls ("Made for iPhone" controllers, iCade, GameDock), TV-out, single-player leaderboards and achievements, and a furiously angry but enormously cute Quetzalcoatl.

STOMP OR DIE!
In single-player, you are a fearless gold pilferer, in a boxy land where massive gold coins mysteriously appear, one by one. Fortunately, you can athletically bound about to collect them. Less fortunately, the coins are guarded by legions of deadly critters.

MONSTER MASH!
Enemies flood in from the top of the screen, hurtle about, and then mysteriously vanish from the bottom, only to reappear at the top, faster and meaner. There's the blind-with-fury Rabid Boar, the unpredictable Aztec Mummy, Aztec god Nagual (in the form of a jaguar who's fond of leaping) and Quetzalcoatl, the god of death and resurrection. Being fearless (or, possibly, crazy), you lack a weapon, and so your only means of attack is to temporarily stun a foe by jumping on its head. Bonk!

STOMP OR... GET LESS GOLD!
In multiplayer, every fearless gold pilferer in the land descends. Cue: a massive scrap for gold and plenty of jumping-on-heads to temporarily stun opponents and secure more treasure. The first to 1500 points gets bragging rights at the next Fearless Gold Pilferer Conference!

UNDER CONTROL!
Platform games can be tough, and the last thing we want is for you to hurl your iPad out of the window in frustration. This is why we've provided options. In single-player, you get finely honed on-screen touch controls or can use external controls, such as an iOS device, iCade, iControlPad or GameDock. In multiplayer, up to six people can fight it out using the new controllers for iOS 7 or a mix of iOS devices and any one from the iCade, iControlPad and GameDock. (The GameDock supports two players, due to having two controllers.);